The United Nations’ Food and Agriculture Organisation estimates that, by 2050, the world will need 50 per cent more food, feed and biofuel to sustain agriculture for a projected global population of 9.73 billion. As global initiatives attempt to tackle this predicted food crisis, one family have taken matters into their own hands and looked to the ocean for answers.

Nemo’s Garden (or Orto di Nemo, as it’s known in Italian) began life as an idea Sergio Gamberini had while on summer vacation in Noli, a town on the Ligurian coast of Italy. Inspired by the beauty of the ocean and his passion for the natural world, Gamberini had a dream to grow plants underwater.

He shared this off-the-wall plan with his son, Luca, who, in his talk at TEDxCibeles, earlier this year, explained why his father’s idea of underwater farming hadn’t been a complete surprise. ‘My family has always had a deep connection with the ocean,’ he said. ‘So it [felt] only natural that Dad, a chemical engineer with a passion for growing plants, and undoubtedly a few loose screws, would want to experiment with growing plants in the water.’

While father and son are not, and have never been, farmers they do have a deep understanding, and respect, of the ocean, having run the Genoa-based diving equipment company, Ocean Reef Group, for generations. Their lack of farming knowledge didn’t stop them, however, they simply gathered a core team and started exploring just how the concept of underwater farming could work.

They began by going back to the source of Gamberini’s original idea and based a Nemo’s Garden research site near the place the idea first struck – Noli’s Bay. This research stage of the project, saw them place small, transparent biospheres (balloon-shaped pods) on the ocean floor. They then filled them with air, weighed them down and planted seeds in holders enclosed within. 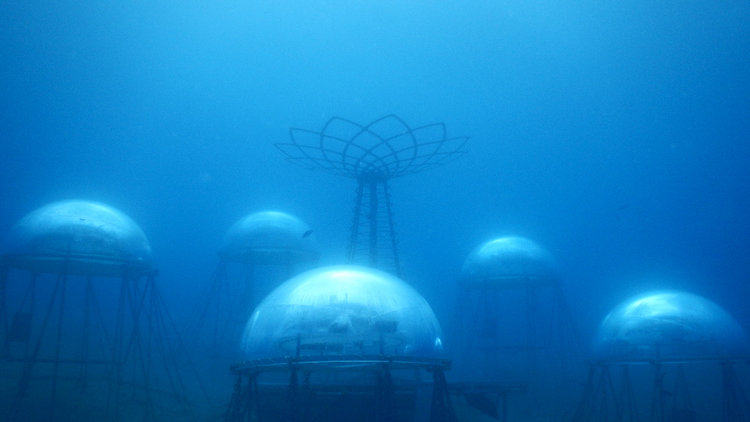 These air-filled pods work as sealed environments, so when sunlight penetrates them the temperature of the water inside increases, making it warmer inside the pods than outside. This also desalinates the seawater, which evaporates and condenses on the pod’s roof, dripping down and watering the plants as fresh water.

These initial trials produced basil, which when tested by CeRSAA, an Italian agricultural research centre, was found to have the same characteristics as basil grown on land.

Since 2012, when Nemo’s Garden started, Sergio, Luca and the team have introduced various engineering and technical elements to their design, collected masses of data and experimented with the shapes, sizes, and materials used in the biospheres. They have gone on to grow a broad variety of over 30 herbs, salads, vegetables and flowers and made the discovery that, even when the crops didn’t exactly flourish, what was planted grew faster underwater than it would on land.

Encouraged by their findings and keen to learn more, Ocean Reef Group launched a 2015 Kickstarter campaign to help raise funds for more research. They raised over US$30,000 for the Nemo’s Garden project, which helped its expansion – it currently consists of five transparent, 2,000-litre capacity biospheres, floating at depths between six and 10 metres and anchored to the sea’s surface with chains. These mini underwater farms are tended to by divers and are all monitored and overseen by a 3.5 metre-high tower, which is powered by green energy. Sustainability is a huge driver of this project and Ocean Reef Group believe that Nemo’s Garden is eco-friendly and isn’t damaging to the ocean’s eco-system.

With the onset of Europe’s winter, Nemo’s Garden is in the process of being partially dismantled for the season. This is due to the potential damage strong seasonal storms and harsh weather can have on the underwater farm, yet it also gives the project team space to plan for next year. ‘For logistic reasons, and to test the mechanical resistance of the structures, we prefer to reduce the size of the underwater site [in winter],’ explains Gianni Fontanesi, project coordinator at Nemo’s Garden. ‘We’ll [then] keep researching new solutions regarding hydroponic LED lights, improve the freshwater gathering system and [start to] think about new ideas for 2018.’

Sergio and Luca’s ultimate goal is to make underwater farming an economically viable, long-term alternate form of agriculture, however, they recognise that this may not be easy. Regardless, they are hopeful that the research obtained through the Nemo’s Garden project will continue to have positive applications for the future, away from the wildness of the ocean. ‘Every year we are discovering new possible applications for these biospheres,’ says Fontanesi. ‘This includes underwater observatories, scientific research labs, fish farms and even as eco-tourism attractions.’

Nemo’s Garden will be fully operational in April 2018.