This article was published in the Newcastle Herald Weekender on March 30, 2019. Images by Mick Ross.

Hidden behind a colourful art and homewares store in trendy Tighes Hill is the eclectic home of Nina Battley, Peter Graf and their dog Milka.

Nina and Peter met 16 years ago at an Austin Powers-themed dress-up party in Perth. After moving to Darwin from Perth for an eight-year stint, they were ready for a sea change.

Newcastle ticked many of the boxes they wanted in a new home city. It had great beaches “without crocodiles or cyclones”, a good food scene, relaxed lifestyle, and easy access to bigger cities for work.

The couple initially sought a warehouse space but fell in love with this particularly unique building. “I couldn’t get it out of my head. We could visualise what it could become,” says Nina.

Nina, an artist/interior stylist, and Peter, a sound recordist/videographer, purchased the house in 2013. They believe it to be almost 100 years old.

Inside, the house reflects the colourful, well-travelled lives of its inhabitants. Piles of books and magazines on art, culture and interiors dot the space, sitting alongside beautiful design items and cool furnishings. 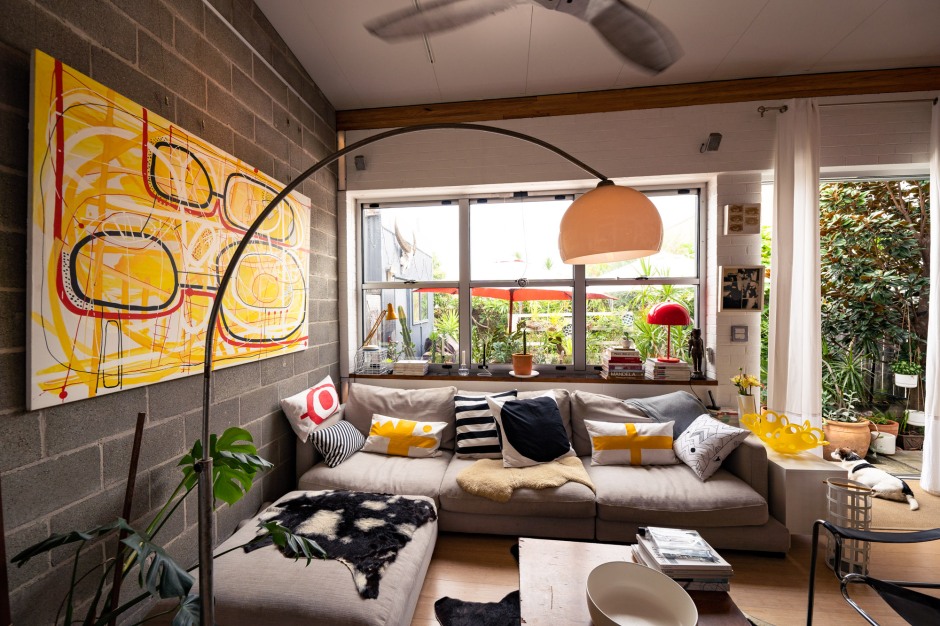 Nina says, “I am addicted to lamps and chairs.” To which Peter counters, “I believe in function and form. If it’s not working, it’s out.”

Treasured artworks cover much of the walls in this uber-stylish, high-ceilinged home. Many pieces are by Nina, whose paintings are bold, bright and highly abstract. As well as her mother and stepfather (who are both artists), and friends, alongside items they have collected along the way, such as indigenous works from Darwin and Perth.

They point out a custom-made African mahogany kitchen bench brought with them from Darwin, and broken cement mixer barrel used in their renovation repurposed as a plant pot. A striking Java cabinet and Indonesian doors in the garden are a nod to time Nina spent living in Iran and Indonesia as a child.

The pair have worked hard to create a home that allows them to blend work, life and play. “We wanted a place where we could mix our careers and live in the space as well,” says Nina.

Standing in the space, it’s hard to picture it was previously a doctor’s surgery. After two years of initial renovations to the existing building, they put together plans for an extension. Peter says, “The takeaway from our Darwin house was that it allowed that flow from the inside to the outside. We really love that all-year-round concept and wanted to do that again here.”

They undertook much of the work themselves with a little help from a concreter and a bricklayer. The building now consists of two street-facing shopfronts, Peter’s office, Nina’s studio (which doubles as a guest room), their bedroom, and a large open-plan kitchen, dining and living area overlooks the garden, outdoor entertaining area and shed.

Just one door divides the shop from their home and workspaces. “I love that it’s all open and that you can wander between all the spaces,” says Nina. “We had the potbelly stove put in two winters ago and it makes the whole house so toasty and warm. I love sitting on the sofa and reading magazines while Pete’s cooking.”

The car park at the rear of the property has been turned into a lush garden sanctuary. “It’s home to lots of native trees, colour, foliage and tropical elements,” Peter explains. Among them, frangipani, magnolia, olive and paw paw trees, succulents, cacti, citrus plants and herbs.

The home is unique and stylish but highly liveable and functional. It’s an aesthetic also present in the art, homewares and interiors Nina curates for the MiiO store, which includes pieces by local, Australian and international makers. Nina notes, “All the things I put in there I would put in my home.” 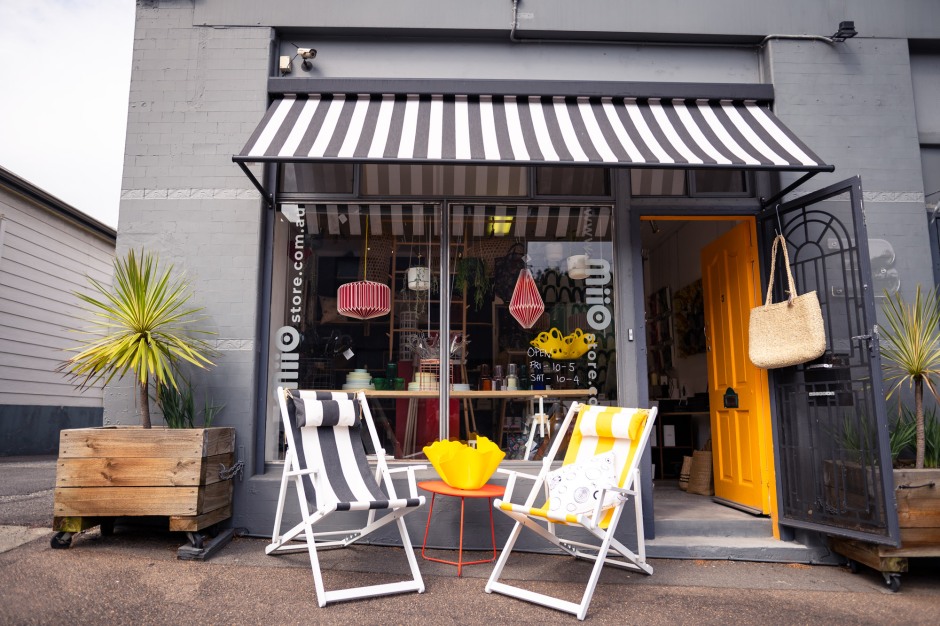 German-born Nina and Austrian-born Peter are happy to call Tighes Hill home and have no immediate plans to move. They love the little suburb’s sense of community and are excited by the changes happening in the area, like the recent openings of the nearby Between the Lines Gallery and Praise Joe Urban Pantry cafe.

They’re now busy planning the next stage of work on their home – a pergola to make better use of their outdoor area and updating their kitchen – alongside eventually extending the trading days of MiiO beyond its current Friday and Saturday.