This article was published in The Newcastle Herald ‘Weekender’ print edition and online on December 14, 2019.

Couple Sarah-Jeanne Lapointe and Graeme Mudd moved into what they have affectionately dubbed ‘the treehouse’ in May 2019. The house, which they rent, sits elevated high above the street surrounded by bush in leafy Rankin Park.

“It was really different,” says Sarah of what drew them to the split-level home, which is thought to date back to the mid-eighties.

“We really liked the whole design of the house and the natural environment in which it lives. It has a mid-century feel with the high ceilings, nice features and lots of open space.”

The three-bedroom house gave them the ability to create a guest room in the upstairs loft for family and friends who come to visit from Sarah’s Canadian hometown of Quebec.

As well as create a studio for Sarah, who is a freelance copywriter and PR consultant. She also recently started an online business called ‘Vintage Stories’ selling retro clothing on Depop, a social shopping app.

Graeme, who is a semi-professional mountain bike rider and a mining fitter-mechanic, says he loves the house’s seclusion and quiet.

“I can come home from work, open the doors up and feel like I‘m outside. You look out from quite high up in the treetops and it feels like there’s no one else around.”

Sarah laughingly recalls their first night in the house. “We thought someone was breaking in but it turned out to just be a possum trying to say good night to us!”

The couple’s first meeting could be described as love at first sight.

“It was in August 2017, at the downhill mountain bike world cup in Mont-Sainte-Anne in Quebec,” says Graeme of where they met.

“I was racing and Sarah was doing PR for it.”

Each had noticed the other around the event and – as is the way with modern romance – found and followed each other on Instagram, before friends eventually introduced them.

“From the second we said ‘hi’ to each other, we didn’t leave each other’s side,” says Sarah.

The pair spoke every day after that initial meeting. Three months later, they met in Greece for a 10-day holiday to see if the relationship had a future.

Walking around hand-in-hand the next day, Sarah recalls thinking, “This is a done deal!”

When Sarah returned home to Canada for two months, Graeme suggested she come to Australia.

“There was no stuffing around,” reflects Sarah. “Graeme said, ‘You know what, let’s just move in together now and we’ll just see if it works or not’.”

The couple found a short-term rental, a furnished granny flat in Tighes Hill, where they lived for four months.

“It was a good test for the relationship,” says Sarah. “And it worked.”

Graeme returned the gesture, spending a few months in Canada to experience Quebec and Sarah’s life there.

Sarah relocated to Newcastle in November 2018 and they moved into a brick miners cottage in Broadmeadow soon after. 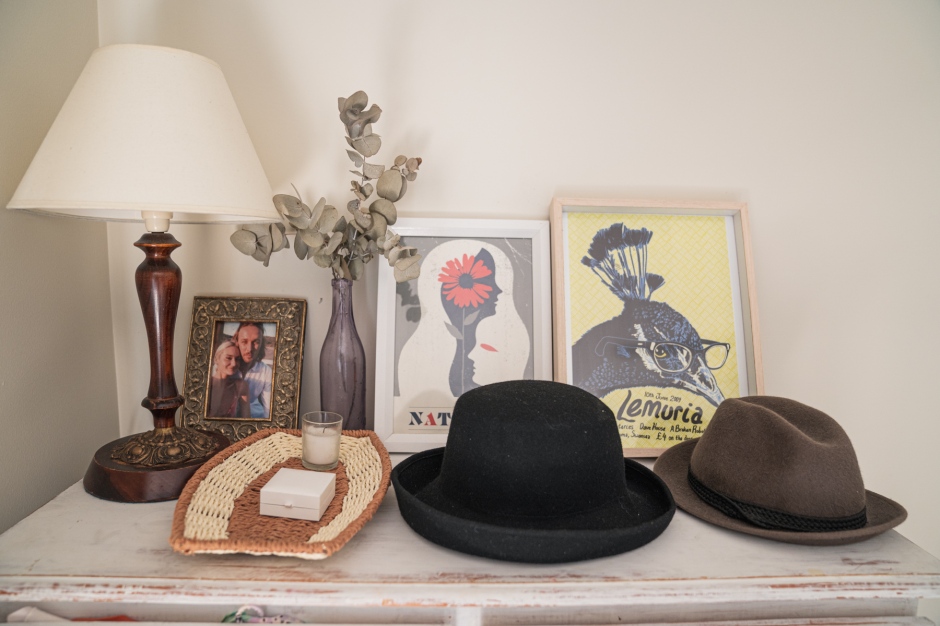 They furnished the house from scratch. Sarah having sold all her belongings back in Canada – except for a few treasured objects, like photos and cushion covers, which she could fit into her luggage – and Graeme not having lived out of his family home in Maitland, due to travelling regularly for mountain bike events.

Both point to the brown vintage couch sitting at the centre of the treehouse’s sun-drenched living room. “That’s the first item we bought together,” says Sarah.

Coincidentally, the couch’s previous owner was selling it because she was moving to Canada from Newcastle.

It’s a favourite piece for both of them.

Graeme adds: “I like my dad’s vintage surfboard sitting in the corner over there too.”

They purchased a few additional pieces when they moved to Rankin Park. Many of which they fixed or refreshed.

“There is nothing in here furniture-wise that is new. Everything is up-cycled or is second-hand or retro,” Sarah explains.

“Sometimes, it meant a lot of work. But, for us, it also meant having a style we really like at a very small cost.“

Graeme says he loves the hunt. “You have this idea in your head of what you’re looking for. You spend weeks scrolling Gumtree or Marketplace. Then bam, there it is! It’s super exciting.”

The home’s interior is eclectic and vintage but also homely and comfortable. Earthy tones reign, with the space decorated with unique knick-knacks and many plants.

“I think who we are and our lifestyle is reflected in our home,” says Sarah.

While the couple enjoys living in the treehouse, they hope to buy a home of their own in Newcastle in the near future.